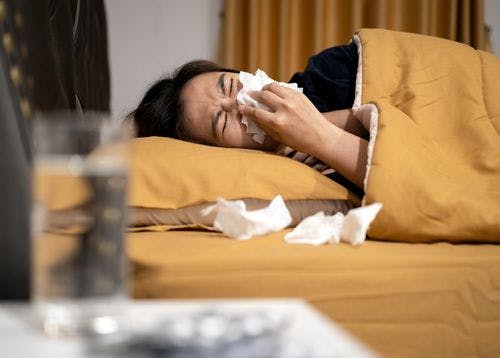 A stuffy nose is another term for nasal congestion, which occurs when tissue in the nose becomes swollen due to inflamed blood vessels.1,3 This swelling leads to an uncomfortably stuffy, plugged up feeling that may be accompanied by nasal discharge—more commonly known as a runny nose.1 A stuffy nose, also called nasal congestion, can be brought on by anything that irritates or inflames the delicate nasal tissues.2 Most commonly, this includes infections and allergies, but irritants like tobacco smoke and car exhaust may also be to blame.1

Some potential causes of a stuffy nose include1:

These causes and others may contribute to a stuffy nose. You may want to speak with your doctor to determine a specific culprit, but generally, it can be treated at home. If your symptoms last more than ten days and are accompanied by a high fever or nasal discharge that’s green or yellow in color, speak to a medical professional.

When treating a stuffy nose at home, take steps to avoid known allergic triggers and common irritants like cigarette smoke and sudden humidity changes.1 Saline sprays and rinses may help to loosen mucus, and an over-the-counter antihistamine may help as well.1 Medications that treat nasal congestion, like Robitussin Multi-Symptom Cold CF, can also provide relief.

A runny nose can be brought on by allergies, a cold or flu, or colder outside temperatures. Normally, the mucus in your nasal passages that traps harmful particles that enter the nose is moved to the back of your throat to be swallowed and passed through the body or sneezed out.2 When this process is slowed down by cold temperatures or illness, the mucus stays in your nose and then “runs” out.2

There are several causes of a runny nose. The most common include2:

A runny nose may be accompanied by a stuffy nose, fatigue, or a sore throat pain due to postnasal drip. When too much mucus is present, some may drip down the back of the throat, leading to irritation, cough and sore throat pain.2

Saline drops or sprays can help manage a runny nose by loosening the mucus in your nose.2 Other home remedies include neti pots, hot showers and eating spicy foods.2 A diet rich in immune boosting foods may help you feel better, too. If your runny nose is truly bothering you and making it hard to sleep, try over-the-counter medications, like Robitussin Severe Multi-Symptom Cough Cold + Flu Nighttime. These medications contain decongestants, which are drugs that help to shrink the blood vessels in your nasal passages, making it easier to breathe.3

Contact a medical professional if your runny nose persists, or is accompanied by3:

While a runny nose and stuffy nose are similar and often happen simultaneously, they’re not the same and do not necessarily share the same cause. Talk to your healthcare provider if you’re curious about the cause of your symptoms.