No matter what it’s caused by, chest congestion is never fun to deal with. From post-nasal drip caused by the common cold to your airway protecting your body from airborne irritants by overproducing mucus, lots of things can trigger mucus and phlegm collection in your lungs. Mucus settling in your lungs means it’s time to look for chest congestion remedies, which include finding ways to stay hydrated and expel what doesn’t belong. 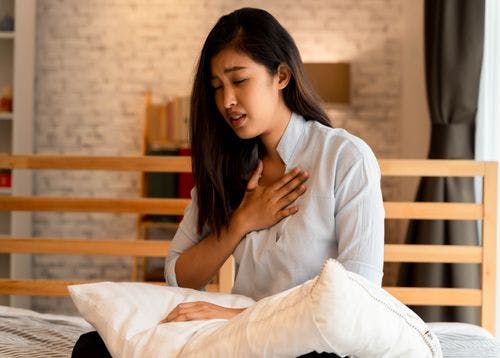 What is Chest Congestion?

Chest congestion is mucus buildup in your lungs. Most experts think that your respiratory system makes about a liter to a liter-and-a-half of mucus every day1, and when it finds its way into your lungs it creates that hard-to-breathe feeling you recognize as chest congestion.

The purpose of mucus isn’t to irritate your airway, though. The body generates mucus daily to line sensitive tissues (your mucus membranes), keep tissues moisturized, and protect the body from irritants and invaders by capturing them in its viscosity.1

The symptoms associated with chest congestion include:2

When related to a cold or the flu, chest congestion tends to occur in tandem with body aches, fatigue, headache, and sore throat pain.2

Chest congestion is caused when the body’s mucus production kicks into overdrive, which can be caused by respiratory infections like cold or flu, allergic reactions, airborne irritants, or even indulging in a spicy meal.3 This excess mucus finds its way into the lungs—or is generated there—and causes an uncomfortable fullness.

We all know the feeling: A pounding headache, an alternatingly stuffy and runny nose, and sore throat pain give way to a phlegmy airway and heaviness and fullness in the chest. The common cold often includes chest congestion as a symptom.4

Fighting the flu, battling bronchitis, or plodding through pneumonia can all come with chest congestion as a symptom.4

Seasonal allergens like pollen and environmental allergens such as pet dander and dust mites can cause a host of respiratory reactions, including ramping up mucus production in an effort to protect your airway from irritants.4

Allergens aren’t the only airborne culprits that can cause chest congestion. Anything you breathe into your airway that the body perceives as an invader can cause increased mucus production and lead to chest congestion.4 Cigarette and vape smoke are obvious culprits, but other airborne irritants that have been known to contribute to mucus production and chest congestion include fragrances and perfumes, smoke from cooking or grilling, and other chemicals and strong-smelling things you may find yourself around.

Chronic Obstructive Pulmonary Disease, or COPD, is a constellation of chronic lung conditions that make it difficult to breathe, thanks to inflammation and increased mucus production. It is typically caused by long-term exposure to airborne irritants. Other conditions that can cause chest congestion include asthma and cystic fibrosis.4

If your chest congestion is accompanied by a fever of over 103 degrees Fahrenheit or you see evidence of blood in your mucus (or cough up only blood), it’s time to see a doctor.2 If you have been diagnosed with COPD or another chronic lung disease, chest congestion should be monitored by your pulmonary specialist.2